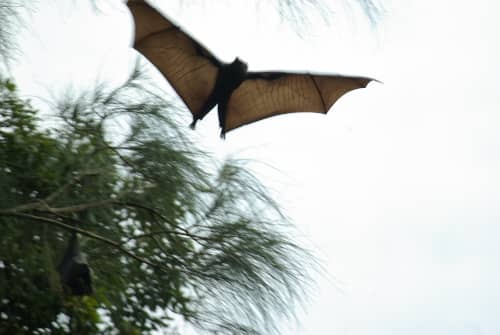 The Hendra virus is dominating the news once again. It is a zoonotic disease, which means that humans can contract it from animals under certain circumstances.

I’m not writing this to scare you or inflame an unfounded fear of wildlife. Zoonotic diseases are generally very rare, but as parents who love to share wildlife experiences with their children, it’s important to be informed.

Starting this blog on a serious note was never my intention – there will be livelier posts to come, I promise! I just felt that this topic was too important to ignore.

Let’s jump into some of the specifics:

What is the Hendra Virus?

Bats – or more specifically, flying foxes – are the natural host for the Hendra virus. It is believed that the virus is transferred to horses when they eat pasture contaminated with bat fluids (faeces and urine). Horses then pass the disease on to humans, who contract the virus in a similar way to the common cold.

In the last 17 years, seven people have been confirmed to have been infected with Hendra virus, four of whom have died as a result of the disease. (CSIRO, May 2011)

There’s no evidence of transfer between bat-to-human, human-to-human, or human-to-horse, however a virus can mutate; that’s where the concern lies.

How does the Hendra Virus affect us?

At this stage, unless you have horses or are around horses regularly, then you don’t need to be concerned. If you do own horses, there is a registered animal vaccine available which does not involve the use of any live virus bacteria. (Always do your own extensive research into vaccines and their potential risks).

Should we stay away from bats?

Bats should never be touched, unless by an experienced and vaccinated bat handler, due to a disease that humans can contract from bats (if bitten) called the Lyssavirus. Observing bats is still perfectly safe. There’s no reason not to go near a bat colony and watch them fly out in the evening. Children will love hearing the flying foxes’ social chit chat and watching them interact with each other. If you’re concerned, get your binoculars out and do it from a distance.

How does the virus affect bats?

There has been a call for the cull of bat colonies. Thankfully, the Queensland Government know that this is not an effective way to reduce Henrda virus risks, for the following reasons:

Some people love bats (I’m one of them) and some people don’t (okay, so they can be a little smelly, but they’re so darn cute!) and although the Hendra virus is something to be concerned about, it’s important to emphasise that bats cannot infect humans. Bats shouldn’t be avoided on your quest for another great wildlife observation experience for children… and just to encourage you, I’ll write a post on bat observations in the next couple of weeks!

Here is the bat observation activity for you and your children.

Fun Ways to Learn about Caves with Kids »