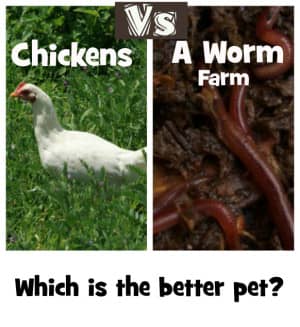 Whether you’re a worm farm owner, a chicken owner, or both – read on for an in-depth comparison to see which makes a better pet.

I’m not allowed to have chickens.

I’ll tell you why in a moment, but I’m more than a little disappointed about this because of the picture perfect scene in my head.

You know the one – your children run up to your back door each day with freshly laid eggs in a cane basket, and you gaze out at your white picket-fenced hen house, feeling accomplished.

Luckily, I have the second best thing – or perhaps the best thing, given it’s multitude of advantages.

I have a worm farm. Specifically, I have the Tumbleweed Can-O-Worms worm farm.

It’s much like having chickens – I give the worms scraps, and they produce something useful for me. Granted, it might not be delicious eggs… but I’m an optimist.

Here are some things to consider when choosing which interactive animal activity to have at home. Chickens vs. Worms, let’s go! I’ve added my score below.

Chickens need a bit of space, especially if you’re someone like me who would want a decent place for my hens to roam – free range chickens are happy chickens.

Worm farms don’t need much space at all; in fact you can even have one out on your patio if you live in a unit.

Compatibility with other Pets

I’m embarrassed to write this… unfortunately, we can’t have chickens because we have a naughty dog that’s a chicken-killer! (A story for another time).

Worms are protected in their contained worm farm, and therefore they will mix well with any other animal you may decide to keep as a pet.

Sam, a.k.a Chicken killer, can’t get to the worms!

Here we have an even playing field. Both worms and chickens can be good for gardens. Chickens aerate the soil, provide fertiliser with their chicken droppings, and reduce the amount of bugs and creepy crawlies around the yard. However, there are varieties of chickens that will also rip up your garden, so it’s important to keep that in mind.

Worms make your garden flourish with never-ending worm fertiliser, and you can add the rich worm castings from Tumbleweed Can-O-Worms bottom level to your garden beds. One point for each.

Chickens require a fair bit of maintenance. They need to have their enclosure cleaned out regularly, extra feed, vet trips, and enclosure maintenance.

On the other hand, worm farms, after the initial set up, only require your scraps two to three days a week and you’re done.

Level of Interaction for Children

Okay, so this is important to me and I need to be honest – chickens are something my children and I would much prefer to touch and pat than worms.

You can get hands-on with worms too, if you like the gooey, sticky, slippery feeling they create in your hand. My daughter didn’t mind, as you can see.  I’ll give chickens two points and worms one.

The chickens win this one. There is something more enticing about eating omelettes and egg pie than spreading worm excrement around my garden.

Plus, I was kind of feeling sorry for the chickens… they can have the point here!

Chickens need to be checked and fed every couple of days, but if you go on holidays for three to four week periods, you can just overload the worm farm with a good supply of scraps and leave ‘em to it.

Both pets can smell if not cared for properly, but generally chickens smell more than a worm farm.

The only smell associated with a Tumbleweed Can-O-Worms worm farm is a pleasant rainforest odour. I can vouch for that. Mine doesn’t stink at all!

Well, there you have it!  In a battle between dirt and feathers, the worms won hands-down.

I love my worm farm and it’s great for our circumstances. The truth is that you really can’t go wrong with either option. Both provide a daily animal interaction for your children without leaving home. Why not do both? (Unless you’ve got a dog who particularly loves the taste of feathers!)

Did I miss any points? Do you have a worm farm or would you buy one?

*This is not a sponsored post.  I didn’t receive any compensation or product for this post. Tumbleweed did however donate one to give away to my readers. That competition has since ended.